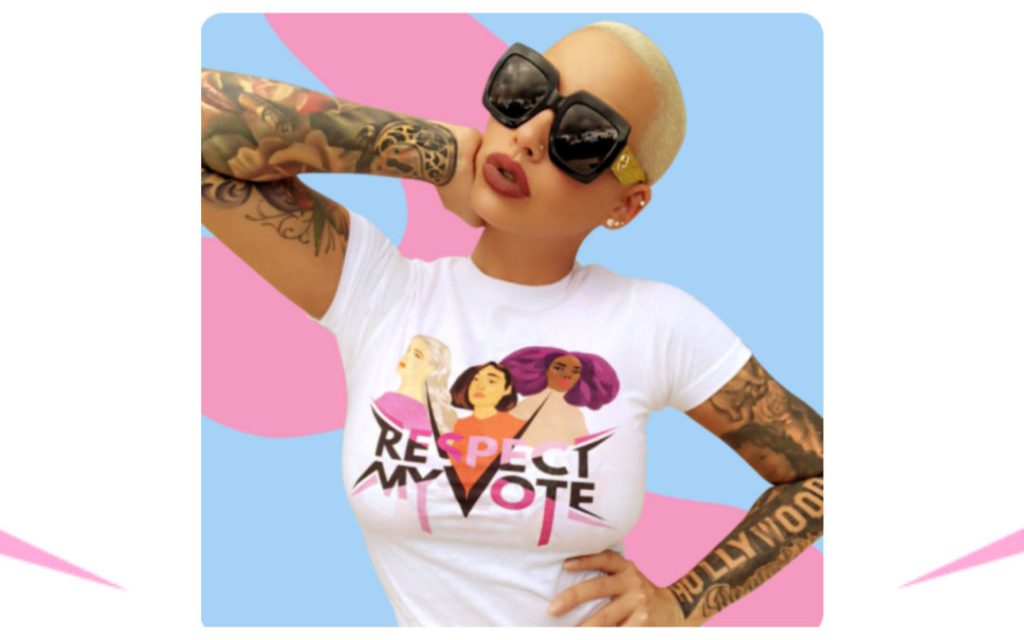 Amber Rose Joins ‘Respect My Vote!’ and Gives Her Top 10 Reasons We Should Vote in the Midterm Elections

Rose and her annual Amber Rose SlutWalk have partnered with Hip Hop Caucus’ Respect My Vote! Campaign to Mobilize Women and Everyone Who Cares About Women to the Polls on 11/6/18

Los Angeles, CA (September 19, 2018) – Activism is the theme of the 2018 Amber Rose SlutWalk taking place in Los Angeles, CA on October 6th, exactly one month before the midterm elections. Rose has partnered with Hip Hop Caucus’ non-partisan Respect My Vote! campaign as a spokesperson and to collaborate on a special seven week campaign leading up to Election Day on November 6th, to educate, inspire, and mobilize young people to the polls on women’s issues.

To kick off the partnership, Amber Rose SlutWalk and Respect My Vote! released Amber Rose’s Top 10 Reasons We Should Vote, focused on the ways in which those we elect make critical decisions on policies that can either bring us towards greater equality and opportunity for women, or set us back.

“I am committed to ending rape culture and slut shaming and empowering women with the freedom to be who they want to be and achieve what they want to achieve,” said Amber Rose, producer, radio and television personality, author, entrepreneur, and founder of Amber Rose SlutWalk. “We are working to change the culture, but we also have to change our laws to fully protect women from harassment, get justice for violence against women, and ensure equal opportunity for women at work and in school. That is why activism is the theme of SlutWalk this year. We are going to exercise our activism by voting. I am excited to partner with Hip Hop Caucus on the ‘Respect My Vote!’ campaign. We are going from the poles to the polls!”

Amber Rose’s Top 10 Reasons We Should All Vote are featured on her Respect My Vote! pledge to vote page at respectmyvote.com/amberrose. The 10 reasons are what Rose along with SlutWalk and Hip Hop Caucus voters are calling on candidates and elected officials to fight for on behalf of women: #1 Rape and Violence Against Women; #2 Reproductive Health; #3 Equal Pay; #4  Mass Incarceration; #5 LGBTQ Equality; #6 Paid Family Leave; #7 Sexual Harassment; #8 Immigration; #9 Environmental Justice & Health; #10 Student Loans and Education. Full text here: respectmyvote.com/amberrose/#top-ten-reasons.

Also at respectmyvote.com/amberrose people can register to vote and pledge to vote. When people take the pledge to vote, they will receive text and email updates from Rose and Respect My Vote! that inspire people to vote, and that also provide information on polling locations, what to bring to the polls, and how to protect your vote. Rose will also be using her social media platform and the platform of SlutWalk to provide inspiration and information about voting.

“Women voters and especially women voters of color are defining the midterm elections and Amber Rose and SlutWalk’s commitment to empowering young voters is a powerful testament to the leadership in and for our culture,” said Rev. Lennox Yearwood Jr., President and CEO of Hip Hop Caucus, the non-profit organization behind Respect My Vote!.  “We are not only calling on women voters to go to the polls, we are also calling on all people who care about women to vote in the interest of equality and opportunity for women. Hip Hop Caucus is honored to be partnered with Amber Rose SlutWalk for the 10 year anniversary of our Respect My Vote! campaign. ”

Last year’s SlutWalk made over a billion impressions online and had over 14,000 people in attendance, and this year the call to action from SlutWalk will be clear, to vote this November on the issues that most impact women’s lives.

Hip Hop Caucus (hiphopcaucus.org) is a national nonprofit, nonpartisan organization established in 2004 that uses the power of Hip Hop culture to engage and empower young people and communities of color in the civic and political process. Follow @hiphopcaucus on Twitter, Instagram, and Facebook.

PrevPreviousRespect My Vote: Turning Voices into Power at March For Our Lives!
NextWATCH: Commemorating 10 Years of Respect My Vote!Next