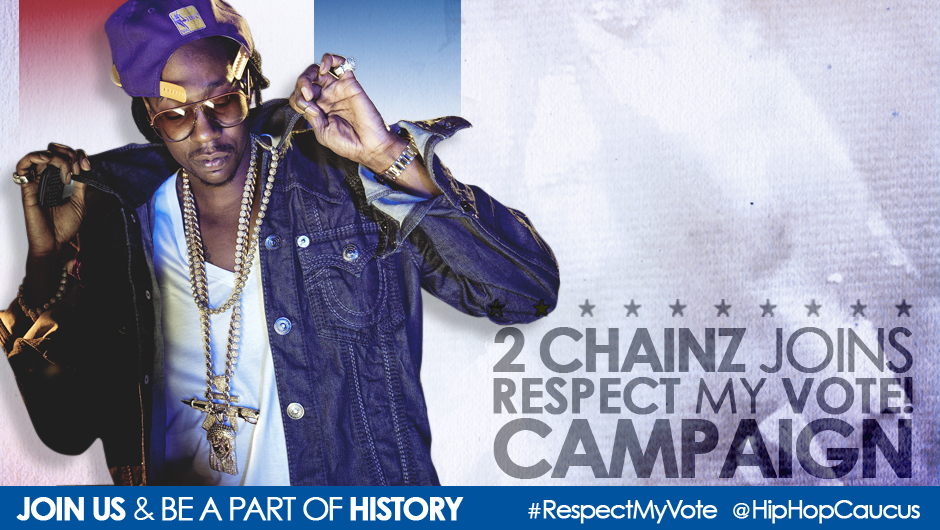 The following is an op-ed by 2 Chainz. To learn more about his involvement in the Respect My Vote! campaign see the joint press release from Hip Hop Caucus and Def Jam.

I’ve had a felony record since I was 15 years old. I made mistakes when I was too young to know different or better. I, like many, thought that because I was once a felon, I had lost my right to vote forever. Then I did some research, and I learned that wasn’t the case. Every state has somewhat different laws, but in most cases ex-felons can vote.

Voting is something that we are told is part of what being an American is. I thought for much of my life that I would never have a voice in our democracy, that I would never be listened to at the most basic level of what it is to be a citizen of this country.

If you have never lost your right to vote, you can’t understand. But for those of us who have been disenfranchised, getting a second chance at having a voice and being respected means everything. It changes how you feel about who you are in relation to this country. You go from thinking you are powerless to knowing that you have a role in influencing the system.

Many of my friends have records, but we are all onto other things now. It is a core American value that people have access to a second chance. Once I knew I could vote, I made sure every single one of my friends knew they could register to vote too, and they did.

As workers, as business owners, as parents, as contributing members of society, ex-felons need to know that they can vote. I personally have been working to inform brothers and sisters of their voting rights for years, and this year I am serving as a spokesperson for the 2012 “Respect My Vote!” campaign led by the Hip Hop Caucus and a coalition of national and local organizations. Respect My Vote!, among many things, informs ex-felons of their voting rights and helps them get registered to vote.

When I looked into the issue of felon disenfranchisement, this is what I found out: The set of laws that makes it difficult for ex-felons to get their voting rights back is the only set of Jim Crow laws that have expanded since Jim Crow. Our criminal justice system is such that people of color, particularly Black men, are over-incarcerated. According to the Sentencing Project, an estimated 1.4 million African American men – 13% of Black men – are disenfranchised at a rate seven times the national average. Given current rates of incarceration, three in ten of the next generation of Black men can expect to be disenfranchised at some point in their lifetime.

By making it harder for ex-felons to register to vote in some states, and by letting people believe that ex-felons can’t vote, significant numbers of people of color people are kept from the ballot box. This doesn’t just hurt ex-offenders who have paid their debt to society; it also hurts our communities because we are less represented in the political process.

As an artist, and more importantly as a man who is blessed with a platform, I want to use my voice to speak on this issue, to educate people, and let this be a signal to others who have made mistakes that they can come back; they will be respected.

I am asking my fans, and everyone who considers themselves an American, to learn about the laws in your state about ex-felons voting rights. In Maine and Vermont prisoners do not loose their right to vote at all. In 35 states, after finishing parole and probation you get your voting rights back. In some states, once you are released from prison you can vote, while on parole or probation. Also, in some states, while you are in jail for a misdemeanor, you can vote.

Laws in 8 states do call for lifetime disenfranchisement for certain categories of people with felony convictions, and four states ban all such persons from voting. We have to stand up for these laws to be changed. It’s not right that once people have done their time, they don’t get their full rights as citizens back.

Get registered to vote, you can fill out your voter registration form online, then print it, sign it, and mail it in. It’s more than worth the 15 minutes it will take you and the cost of a stamp.

Then, start talking about voting with everyone you know. We’ve got to dispel this myth that ex-felons loose their right to vote. Volunteer some of your time to the Respect My Vote! campaign. Together, we are registering young voters, in the hood and on college campuses.

I’m going to make sure that all artists and celebrities in my circles are out front on this as well. We aren’t telling people who to vote for, we’re just saying, VOTE. Know your rights, and use them.

I am a voter. I wore my “I voted” sticker with pride last election, and I will again this November.